I'm Going to Be a Mum/Mom/Mummy/Mommy/Mama/Mother! 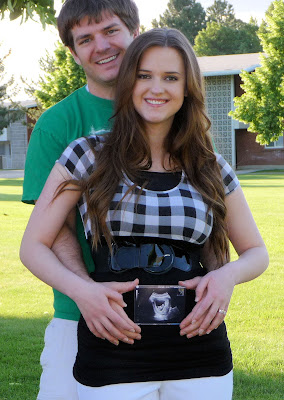 It's so nice to finally announce this! You may have noticed a very extreme decline in my posting over the last couple of months. It was just hard to think of and write posts that weren't about being pregnant or about baby stuff. Now that I've shared our little secret, I think I can get back to more regular posting.

I'm 13 weeks and 6 days along today! Little John + Sierra is due on December 12. That means there's about a 5% chance that this little one will be born on 12/12/12! That would be such a fun birthday! I'm really hoping that the baby doesn't come early because I have finals the week before my due date! I know, I'm a crazy person for going to school when I'll be 6-9 months pregnant. It's my last semester and I really want to finish up school before the baby comes!

We went to our first prenatal doctor's appointment when I was 10 weeks and got to see our tiny little person/alien for the first time! We were so nervous until the we were told that it had a strong heartbeat of 160-170 bpm! It was such a relief to know that everything was going well! 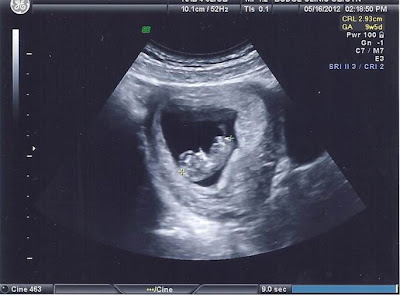 I can't wait to find out the gender! It's so hard to be patient. I've tried a couple of at-home tests that have both suggested that we're having a girl, but I know that the accuracy of these tests isn't super high. John and I will be happy no matter what gender the baby is, but I know that he is hoping for a boy. He says he won't know what to do with a girl ha. Sometimes he'll talk to my stomach and tell the baby that it should be a boy. Also, once when we were walking through the toy section in Walmart he started holding up mini soccer balls and basketballs to my stomach to try to make the baby a boy. I think a small part of me wants a girl but I would also be very excited to have a boy. Either way, it will definitely be an adventure!

Our next appointment is tomorrow. I really hope that they'll do another ultrasound. We should at least get to hear the heartbeat though!

I've already started crocheting some things for the baby. I'll post some pictures of these projects in the next couple of days!