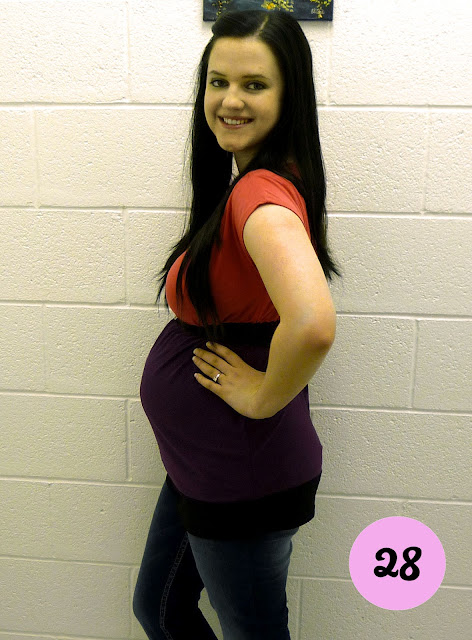 I have officially entered my third trimester! Yay! This pregnancy seems to be going by so much faster now that I'm in school again. I have to say that going to school while pregnant is exhausting, though. Every day I come home from school and feel like I'm ready for bed. I guess I should start taking a naps but the problem is that I hate naps. They're little time thieves, stealing my day.  I love to sleep in but I hate to take naps. Does it make sense? No, because sleeping through the entire morning takes up a lot more of my day than a 30 minute nap. I'm aware of this, but I guess I'm just irrational because I still hate naps.


Okay, enough about my silliness, let's get down to business. Here's a bit more of a pregnancy update:

Weeks along: 28 weeks
Size of the baby: size of a Chinese cabbage (according to the pregnancy app on my phone). She should be about 2 1/4 pounds and 14.8 inches from head to toe.
Movement: there's a lot of it. My mum and sister both got to feel a kick this week. The baby gets really active at about 11pm-12am at night (right when I'm trying to fall asleep, haha). She's been kicking my bladder more frequently too. What a little punk.
Symptoms: I've been getting cramps in my calves every few days. I usually get them in the mornings when I'm still in bed. They are awful! I even got one during water aerobics yesterday. Just one of the many joys of pregnancy.
Cravings: Spaghetti. I've been eating it every day. It's weird because I had a really strong aversion to it throughout the first half of my pregnancy!
Belly button: It's still an innie, but it's getting shallower and more stretched sideways
Wedding ring: I can still fit my engagement ring but I can't wear both my engagement ring and wedding band at the same time anymore. Particularly if it's a hot day.
Nursery: I haven't really gotten started on the nursery. Our second bedroom is currently being used as a study and as a storage area. I've moved some things out of it and reorganized a little. I've partly planned out how I want to decorate it, but I haven't actually started doing it. I'll hopefully be writing a post later this week about my plans.

By the way, I had the lovely glucose test last week. I had to drink the glucose stuff while I was in class. If anyone was watching me while I was drinking that, they would have seen some interesting facial expressions (ones of disgust to be more specific).