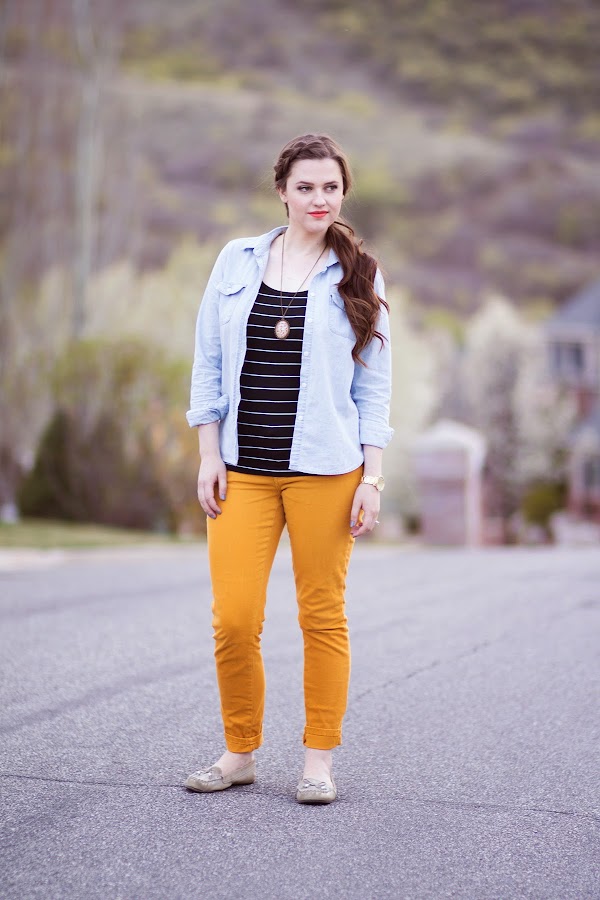 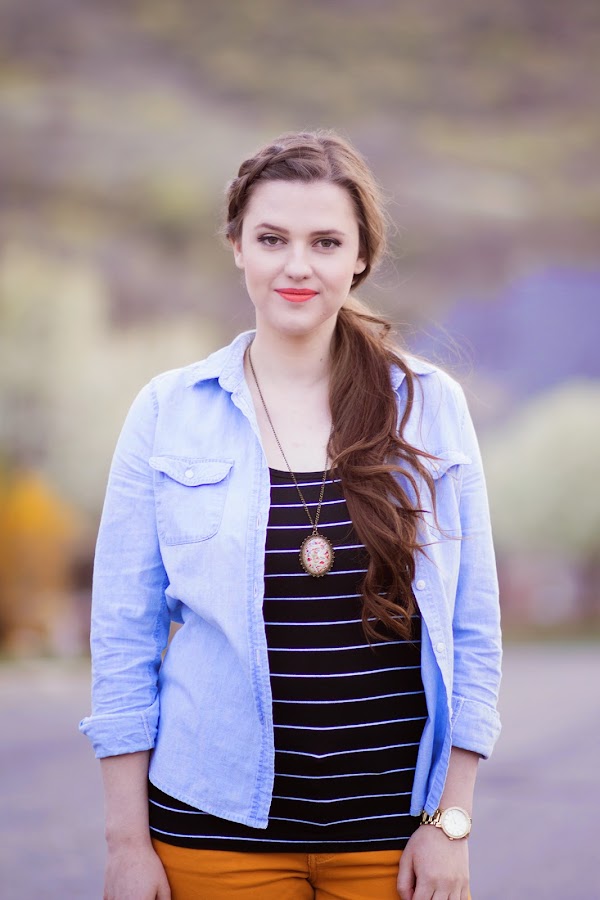 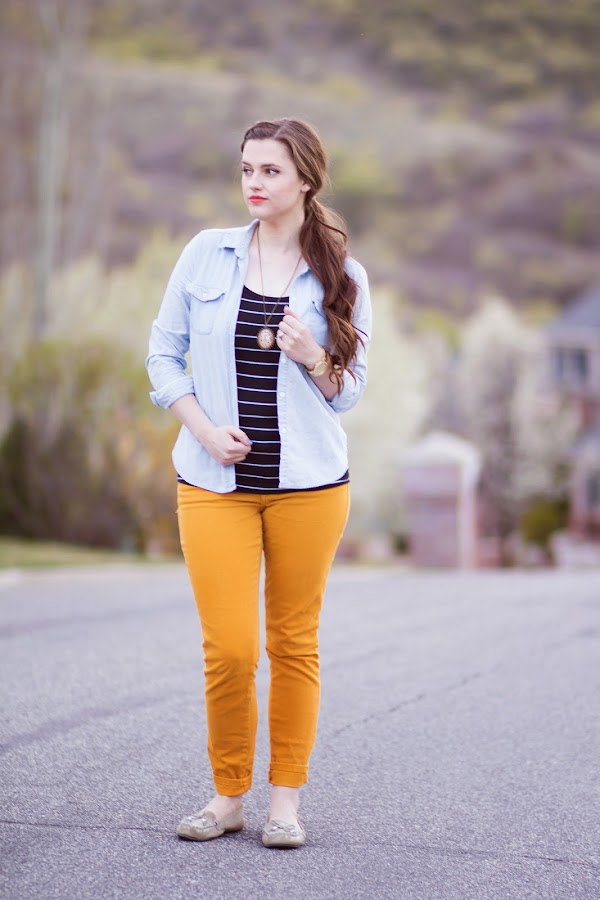 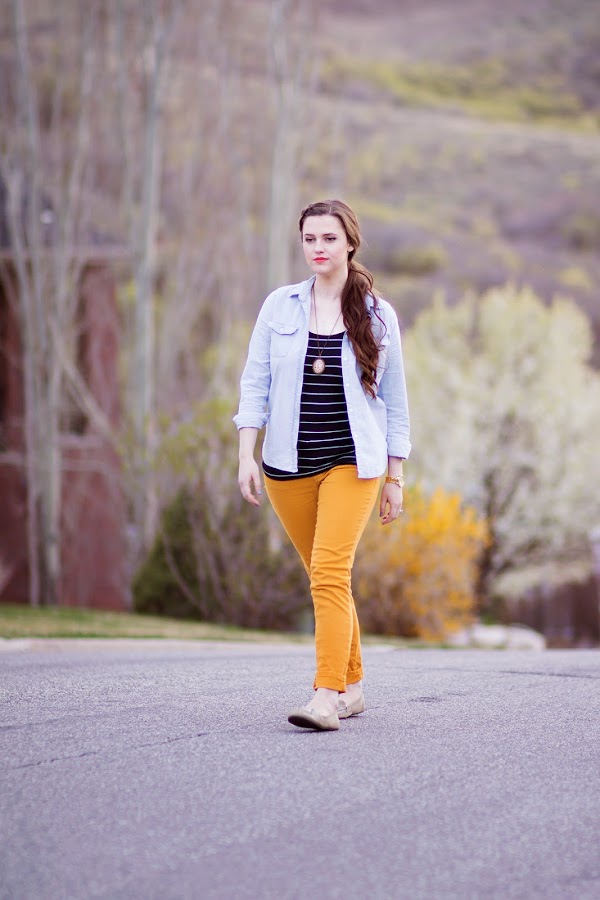 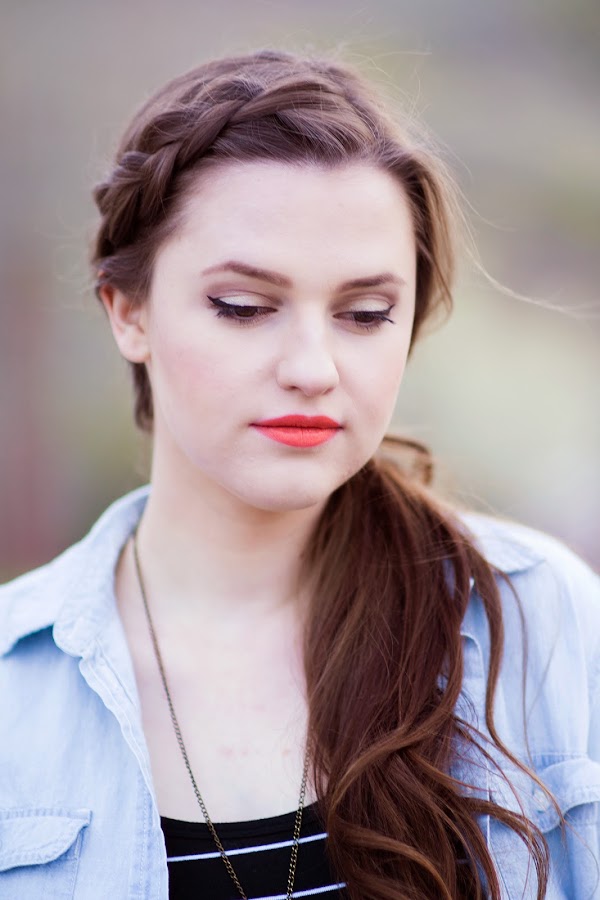 
Mustard is a color that I typically associate with fall. However, when it's paired with a white top or chambray shirt, it can be a really fun and unexpected color for spring. Moral of the story: don't pack away those mustard skinny jeans with the rest of your cold-weather clothes just yet.

Now on to a completely unrelated (but entertaining) story. On Saturday I thought it would be fun to leave Lily at home with John and to go out on a little date with Eve. She's pretty obsessed with princesses right now so I assumed that she would enjoy seeing the new Cinderella movie. I was slightly concerned that it wouldn't hold her attention since she's only watched a couple of non-animated movies before and because... well, she's only two. Being the optimist naive person that I am, I decided to take her to the movie. My reasoning for doing so being: a) Eve's a pretty smart and mature two-year-old and b) I showed her the trailer and she told me she wanted to see it. For backup,  I also invited my mum and sister to join us. I tried to get Eve extra excited for the movie by dressing her in her glass slippers (plastic Cinderella heels from Target) and in her prettiest, "tulle-iest" dress. I even put her hair in a tiny bun on top of her head.

Everything went really well... for the first twenty minutes. Eve loved watching Frozen Fever, which was no surprise. I even dared to hope that watching the actual movie would be okay because for the first few minutes she pointed out everything she saw on the screen, such as birds and horses and the evil stepmother (somehow she could instantly identify her.) As the movie went on her attention started to falter so we started passing her from lap to lap. Eventually though she wanted to walk around the theater so my mum took her out into the hall. And that's when I knew it was all over. There was no coming back from that. As soon as my mum brought her back to our seats, she immediately wanted to wander around and go back outside. Eventually, with about half an hour left in the movie, I decided to spare us all the pain and to take her home.

From now on I think I'll save the movie viewing experiences for home. At least for a couple more years.
Labels: Clothing Fashion Outfits Style