Our beautiful little Violet entered the world in the early hours of April 12, 2017! I've shared the birth stories of both of our other daughters on this blog, so I think it's only right to document Violet's as well. 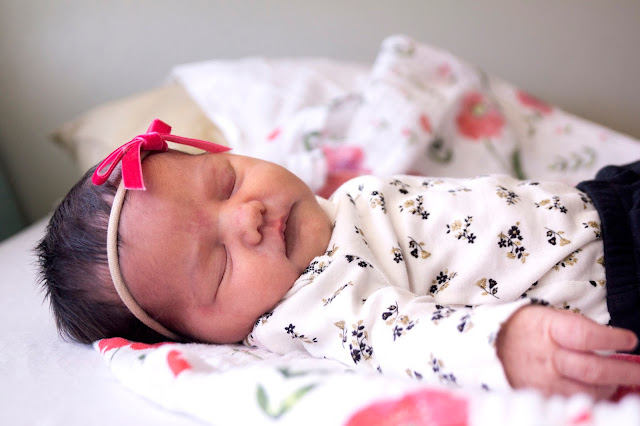 During the afternoon of April 11, I started noticing some mild contractions. I was only 37 weeks pregnant and the same thing had happened for a few hours the night before so I reasoned that I was just experiencing Braxton Hicks contractions and not true labor. Two hours later, I decided to lie down in bed to see if it would stop the contractions. It might seem strange for a woman with a full term baby to want to stop labor but I felt entirely unprepared. My other daughters had arrived at about 39 weeks so I had just assumed that I had a couple more weeks before the baby came. My hospital bag was unpacked and my mum, who I wanted to be at the birth, was on a trip to Australia. I was trying to deny that I was in labor but a little doubt was seeping in. I knew that waiting at home too long could be a mistake. My last labor had only lasted two hours and had started with my water breaking at home. So if my water broke with this labor, there was a chance I wouldn't even have time to make it to the hospital.

After lying in bed for another two hours, I finally agreed to let John take me to the hospital. Fortunately, he hadn't believed me when I told him I was not in labor and he had gathered the things I needed for the hospital and asked his sister to take our girls for the night. Driving to the hospital, I thought about how relaxed I was in comparison to my last labor. That 30 minute drive to the hospital had been absolutely awful. I had been in horrible pain, with my contractions coming one right after the other, only getting a break every two to three sets of contractions. I had been convinced that we wouldn't make it to the hospital. We had made it with about 15 minutes to spare. This time, however, I was able to talk and joke with John. Yes, the contractions were still painful, but since I was actually getting a break between them, they're much more manageable.

I had been timing my contractions for hours and they had not been very regular. When we parked at the hospital, it had been 10 minutes since my last one. I was almost tempted to head home because I hated the idea of going in and being sent home. However, I knew my doctor had told me to come in as soon as I started having contractions, so we went in. When they checked me, I was only 4.5 centimeters dilated. I was a little disappointed since I'd been having contractions for about five hours. The doctor on call decided to admit me, because she had delivered my last baby and knew that things could progress quickly. 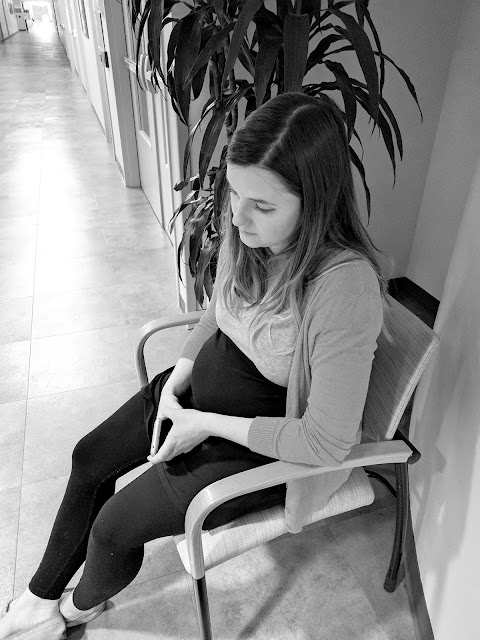 After we were situated in the delivery room, the doctor told me I should get my epidural because she wanted to break my water. I didn't feel like I really needed it yet, but I also knew how scary and intense my last labor had been and I feared the same thing would happen once my water was broken. John warned them that the epidural I had with my first daughter had made my blood pressure drop really low and that they had needed to pump me full of fluids. So my nurse did the same thing this time. However, shortly after my water was broken, I started to feel strange. I told my nurse that I was having trouble seeing. I heard the panic in her voice as she asked me what I meant. I told her my vision was going blurry. After I finished speaking those words, I felt an overwhelming urge to close my eyes. When I opened my eyes again, there were three nurses in the room looking at the screens next to me and a very concerned John watching me. They gave me an oxygen mask and increased the rate of my fluids. I felt awful. I was nauseated and I was unable to move. I didn't have the strength to turn my head or even to move my hands. I recognized the feeling from the epidural from my first labor. I was given Zofran for the nausea but the fluids were failing to improve my blood pressure, which had dropped extremely low. I wish I could remember the exact numbers. I do know that my blood pressure with my first labor dropped to 70/30 and I remember thinking that it was even lower this time. 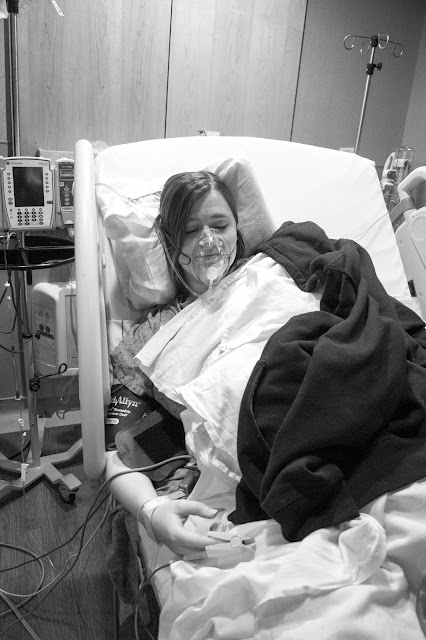 This whole experience had been pretty harrowing. I could see how worried John was. My sister had also arrived between the first and second time I passed out and she was pretty freaked out too. I was worried that my labor would progress too quickly and since I couldn't move, I wouldn't be able to push and might have an emergency c-section. Scariest of all was that the baby had started to show signs of distress during my third time passing out. Fortunately, however, opening up the medication all the way did the trick. I began to be able to move again. I remembered being so relieved when I could finally lift one of my arms off the bed.

During this period of low pressure, I only dilated about a centimeter. Once my blood pressure came closer to normal levels, I progressed quickly. It only took about an hour to jump from around a 5 to an 8 or 9. I only had to push twice and Violet was born. She was immediately placed on me and after she was wiped off and had demonstrated a good cry, I was able to spend an hour enjoying some newborn snuggles before all the tests were done on her. That was something that had changed since my other two deliveries. 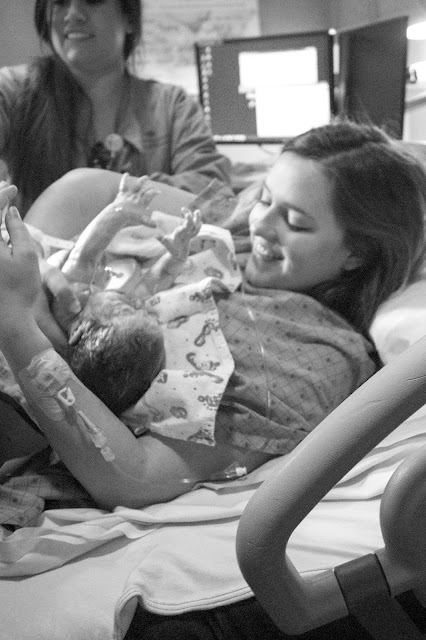 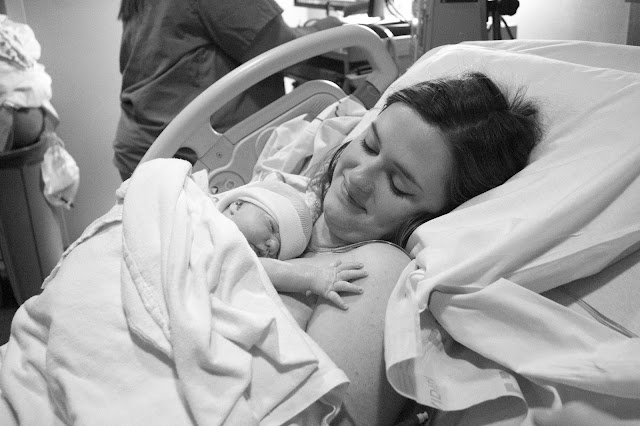 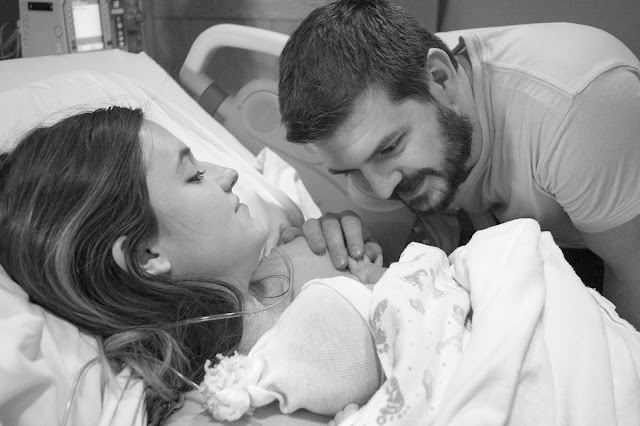 Violet weighed 7.0lb, was 20 inches long, and had lots of dark hair! Violet arrived at 2:48 am and it wasn't until about 5 am that John and I were finally able to get some sleep. 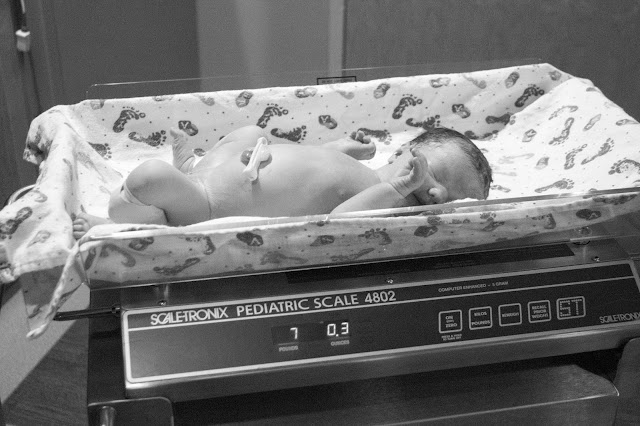 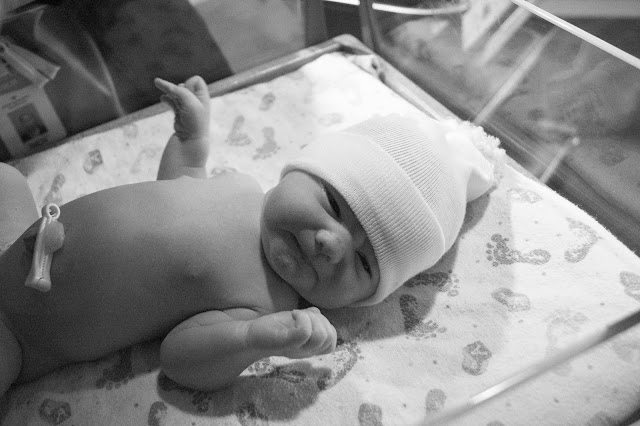 Later in the morning, John's sister brought our girls in to meet their new sister. Eve loved her and wanted to hold her for a long time. Lily, however, was more interested in playing with the buttons on my hospital bed. She has since shown a lot more interest in her little sister. She calls her "Baby Biolet" and always tells me that she loves her. Violet's face always lights up when she sees her sisters. Eve has really stepped up in her biggest sister role. She is always willing to sit with Violet and entertain her when I need to get something done. 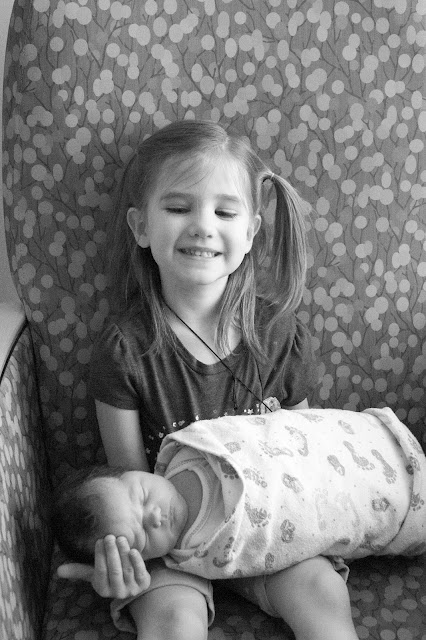 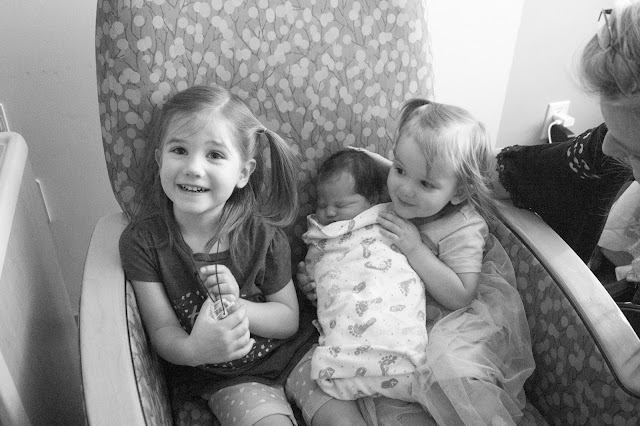 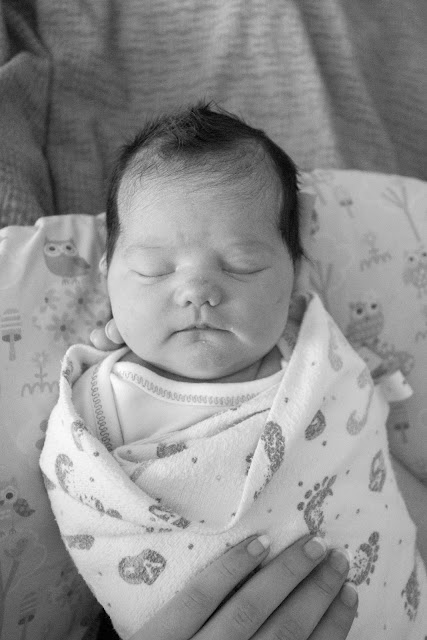 Life is definitely busier and more complicated with three kids but I'm so grateful to have them! 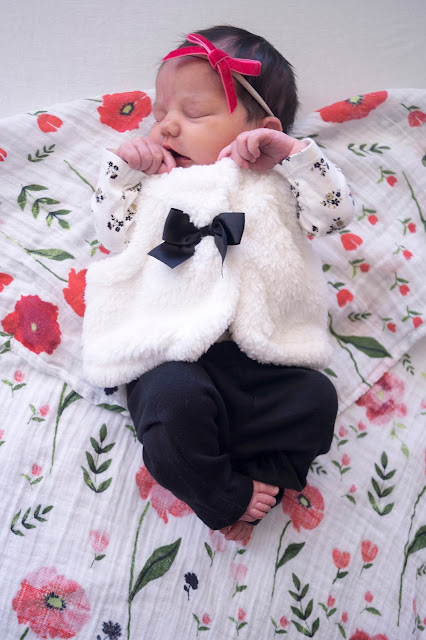 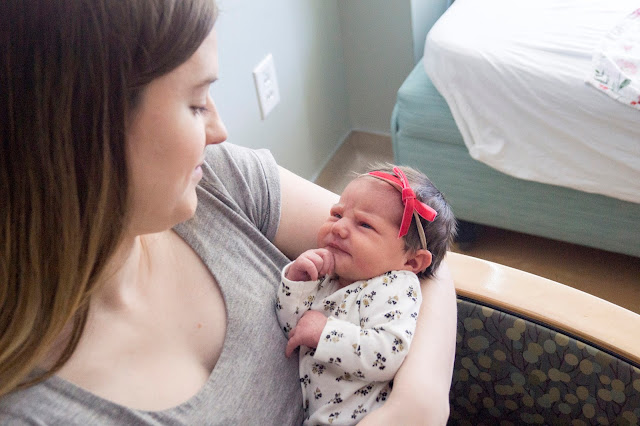 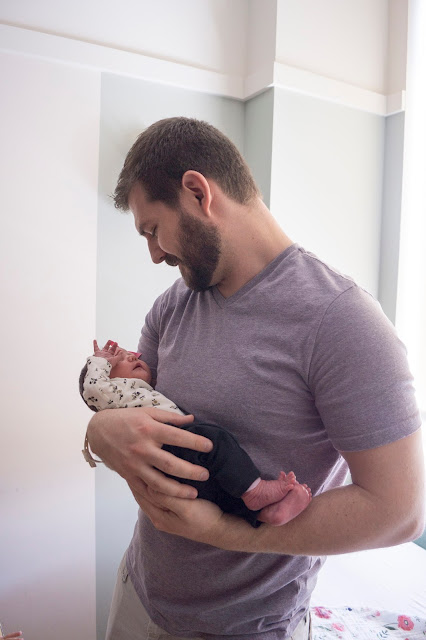 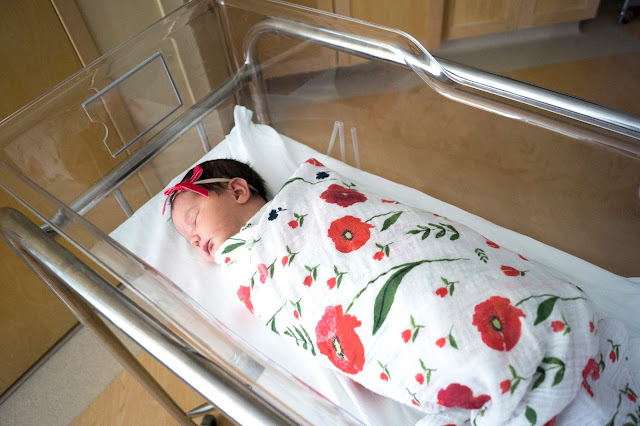